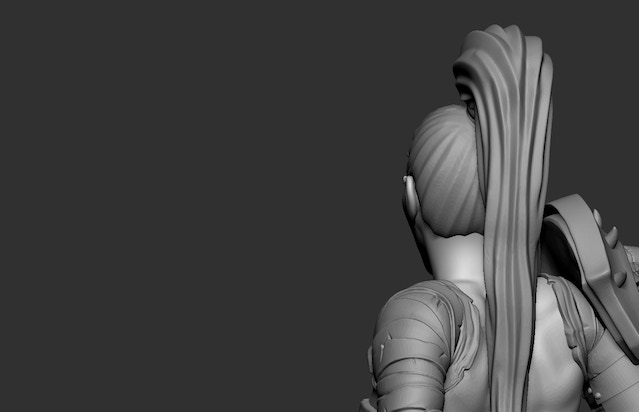 Saw this on one of the sculptors' screen and fell in love with her...

We have been working like crazy this month, creating more troops than we ever did. The working rhythm is so intense that at one point, someone raised his head from the computer and said “hey guys, I think we forgot to make an update”. There was a general “oops!” in the room... and so here are some news to keep you posted.

When we work on the sculpts, it's hard to move into “render mode” as it breaks everybody' rhythm, which is why you haven't seen images these last four weeks. But now we are very close to the end, so some of us can start on the renders and we are currently preparing the images to share with you.

Here's what's in the Image Render Queue. Please note that as we proceed to render, we occasionally find problems which force us to remove a sculpt from the render queue and rework it, so while this list is pretty definitive, there can always be last-minute changes:

And finally, listed below are the models that we are currently working on. We are not sure when they will be finished, but we plan to have at least a few models of each troops to feature in the Pledge Manager, to help you to make your Rewards Selection:

The Pledge Manager is being compiled right now. It will be open within the next 2 weeks, possibly before. Keep reading for info on shipping costs and first shipments.

My key problem has been with the shipping costs. I wanted to manage them differently from our TGG1 Kickstarter, but no supplier is able give me what I want. We've worked with many e-commerce solutions and suppliers, some even specialised in Kickstarter Rewards. But none has been able to come up with a solution that would allow the functionalities we need, given the fact that our production is spread out over time, that no two Rewards Selection are alike, and that we want to ship out Rewards as soon as they are produced, so that your wait is as short as possible.

And so, I've had to go back to the system we used for our last Kickstarter, that is, flat-rate shipping and a 2-week window for completing the Pledge Manager. We may be able to re-open the Pledge Manager later so that you can add to your pledge while the production is moving forward. More on this later.

As before, shipping costs will be collected upfront. Once they are paid, you will have access to the Pledge Manager.

So this means that we have to get back to our previous shipping method, which we used on TGG1. The price of the shipping will cover shipping, handling, and packaging and it will be along the lines of what we had back in 2013, that is, between $22 and $28. But this will cover 2 shipments as we are offering you one shipment for free!

Kickstarter Shipments will begin in June!

The first shipments will be made in the month of June and will include ALL the Freebies + all the minis that have already been produced by the foundry and are in stock at this time.

The next shipment will be made when the rest of your rewards are ready to ship. There will also be an option to buy additional shipments if you want to.

I am preparing a detailed listing on this. In fact, the listing should show

This way, you'll know what's happening now that we are nearing the end of our sculpting work. I shall put this document online and update it regularly. More on this soon...

And stay tuned for tons of images and new sculpts coming your way next week :)

If you have questions, please contact us directly, either via the Kickstarter private message system, or via e-mail at RagingHeroesTeam@gmail.com, or via the Live Chat box at the bottom right of this page.. We strive to answer within 24 hours (except on week-ends).

I’m so glad to see the Lust Elves Worm Riders Command Group got unlocked! I can’t wait to see them!! Keep up the great work!