Welcome to Update #35 for theTGG2: Light & Darkness Kickstarter campaign!
(You can still Pledge on our special page, but hurry, there's little time left).

Firstly, thank you for all the positive comments on the last update: not knowing which miniatures to choose because they’re all so awesome is exactly the kind of problem we like to create :-)

We’ve got some important info for you, so let’s get started.

Things are moving along swiftly, and a first wave of shipments should happen as early as April. This means that the Pledge Manager will soon be live!!! For more details, keep right on reading.

Indeed, in terms of sculpting, we are nearly there:

That being said, when this Kickstarter began, we were hoping to deliver at the end of March, but sadly, it will not happen this month, although you can expect the first wave to start shipping in April!

We wish there hadn’t been any delays, but there were. We hate letting you down and we owe you an apology. From the bottom of our heart, please know that we are sorry, and that we are tirelessly working to catch up.

As you know, we're constantly obsessed with the quality of the minis you will receive, and that's what these delays have been about.

We went overseas twice for a total of over a month to visit the foundry and, together, improved and streamlined many processes. We also helped them recruit new staff, to better handle the TGG2 production. On their end, they completely upgraded their manufacturing processes to achieve an even higher quality level. We also recruited and trained more than 10 3D sculptors during this project, and only kept a few of the very best from that pool. We think that the result of this really shows in the quality of the sculpts, which we feel are even a step up from the TGG1 models. 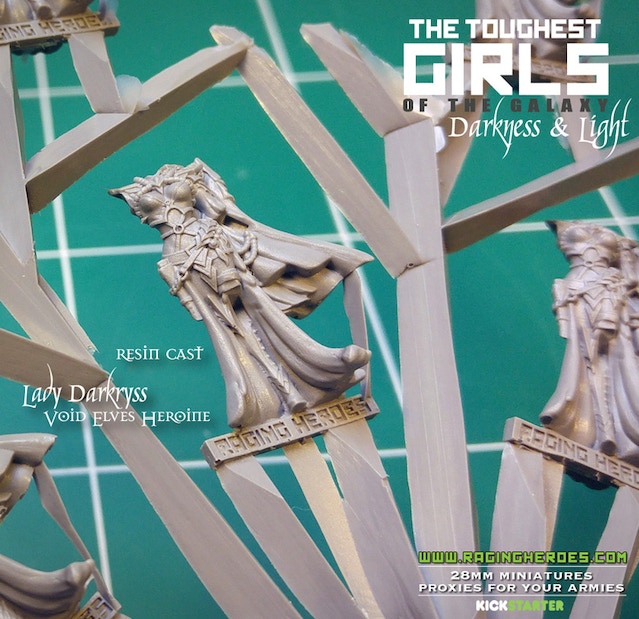 The next batch of renders are almost ready for processing, so you’ll be getting a massive slew of them in our update at the end of the month! I'd have liked to have shown them in this post, but creating them not only takes a lot of time, it also stops the rest of the work and we have to balance content for Updates with getting things finished. Since we’re so close to finishing the troops, we thought it was best to knuckle down, head for the finish line and give you a big Update next time!

I mentioned an Update at the end of this month? That’s right, and if you thought the last one was huge, wait till you see what’s coming… you'll be seeing renders for:

AND with many more Command and Troops to follow just a month after!

These have all come about so fast because the workflows we talked about before are picking up speed. The initial stages were the most delicate and took almost 3 months to setup, which was in part responsible for the delays. But now they’re in place, we are flying through the other steps!

The first units we worked on were the Dark Elf Halberdiers which, after a few tweaks, were finished super-fast and so I’ve managed to sneak a sample out to show you: 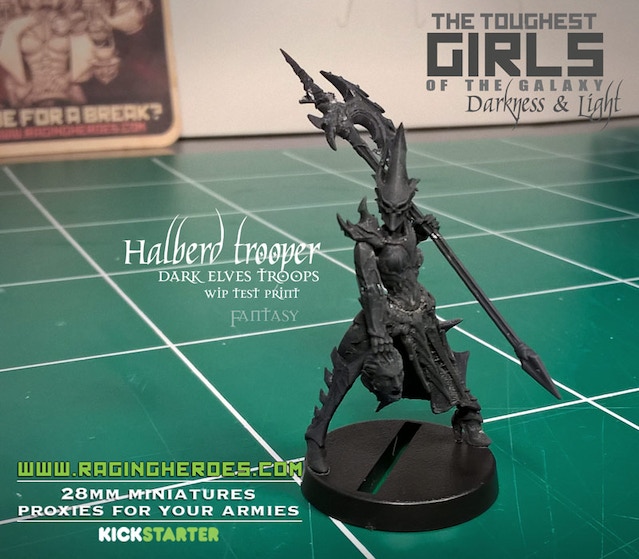 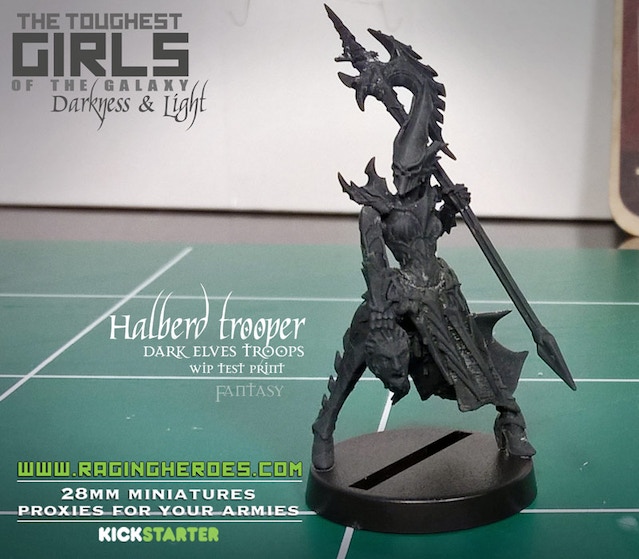 All of the progress mentioned above means that the Pledge Manager is almost ready to be released!!!

Just like with our previous Kickstarter, we chose to delay opening the Pledge Manager until we had as many renders as possible to show you when it opens.

The Pledge Manager will follow the same format as the previous one, which is basically a very intuitive and easy-to-use online shop. Here's a screen grab for the TGG KS Pledge Manager: 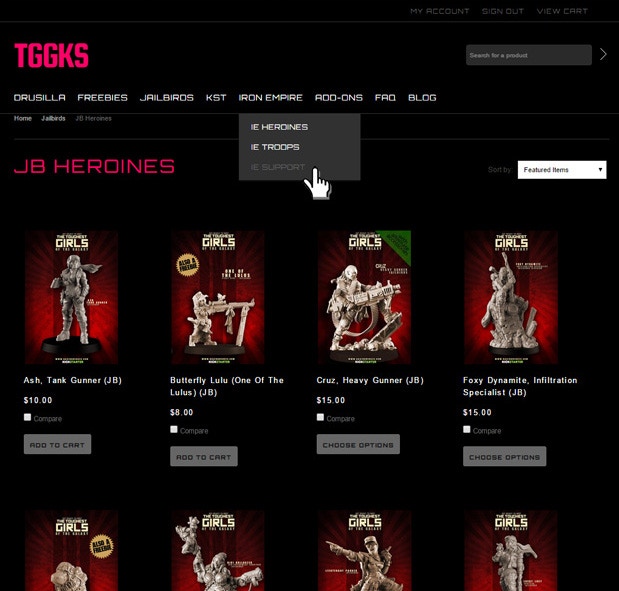 Please note that you WILL be able to add more funds directly into the Pledge Manager.

However, you WON’T be able to JUMP UP to a higher Pledge Level once the Pledge Manager has launched.

If you wish to jump to a higher pledge level, you need to do it as soon as possible:

What's in the First Wave of Shipments?

Our goal is to ship a First Wave of TGG2 minis shortly after the Pledge Manager closes.

The foundry has already begun casting most of those.

Here are photos of casts and new prototypes that we are regularly receiving from the foundry. 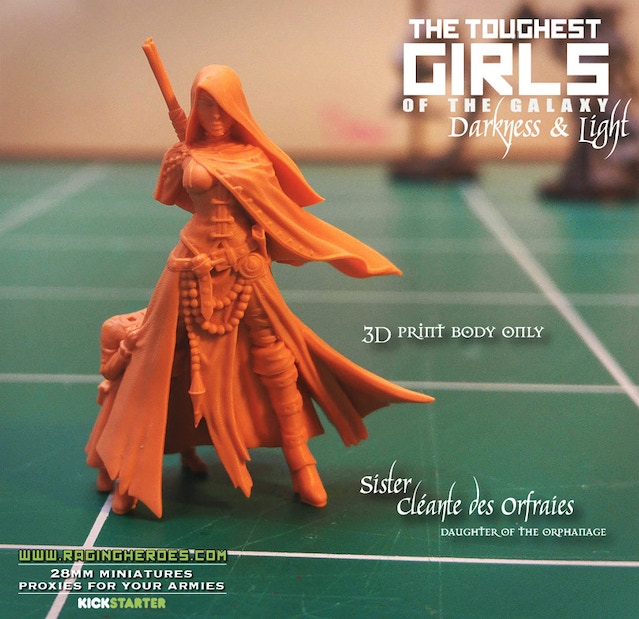 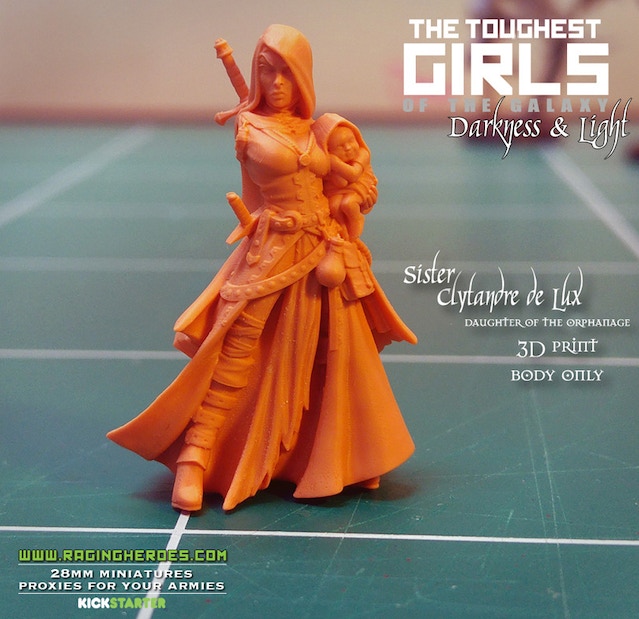 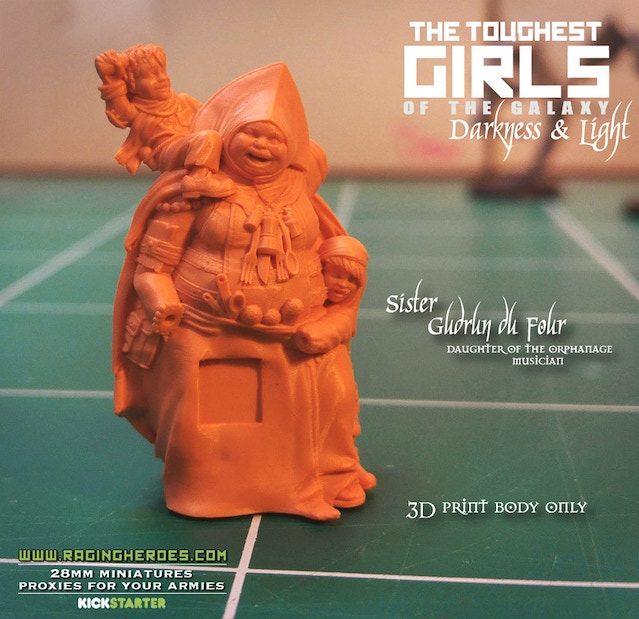 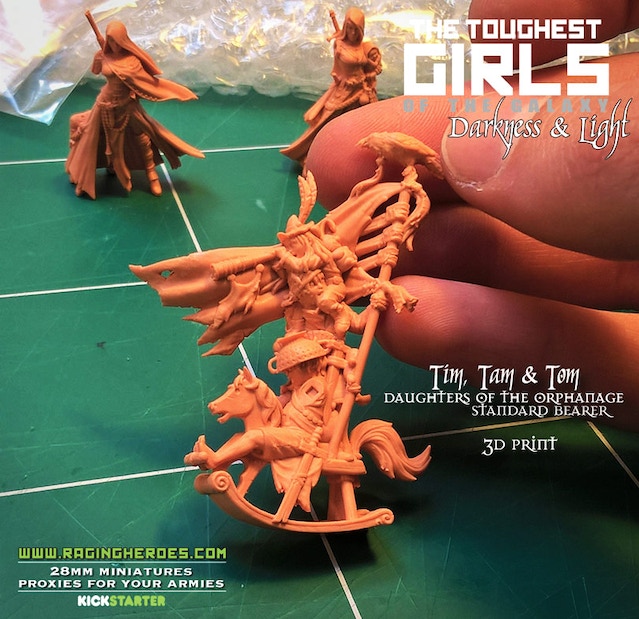 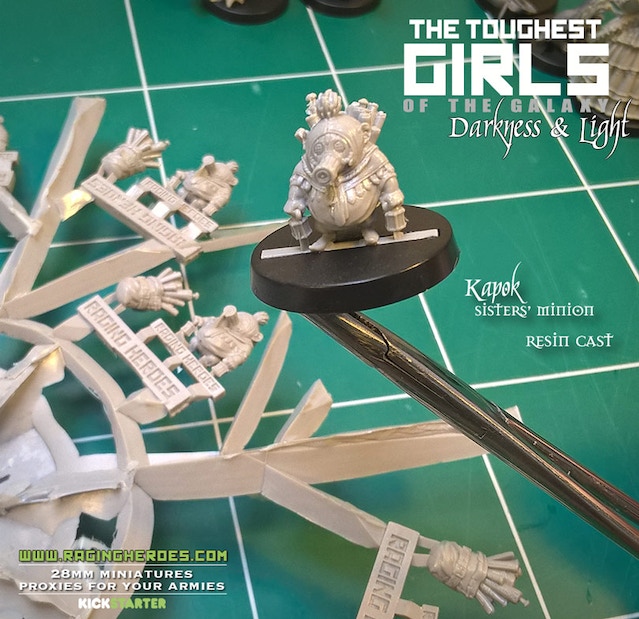 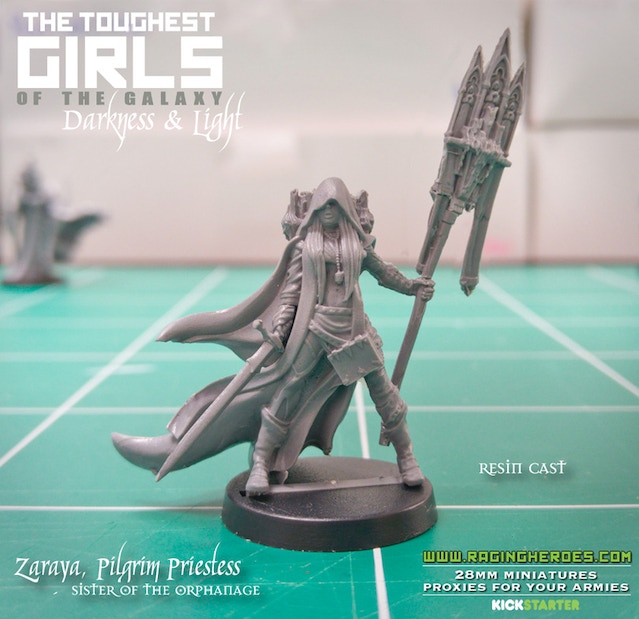 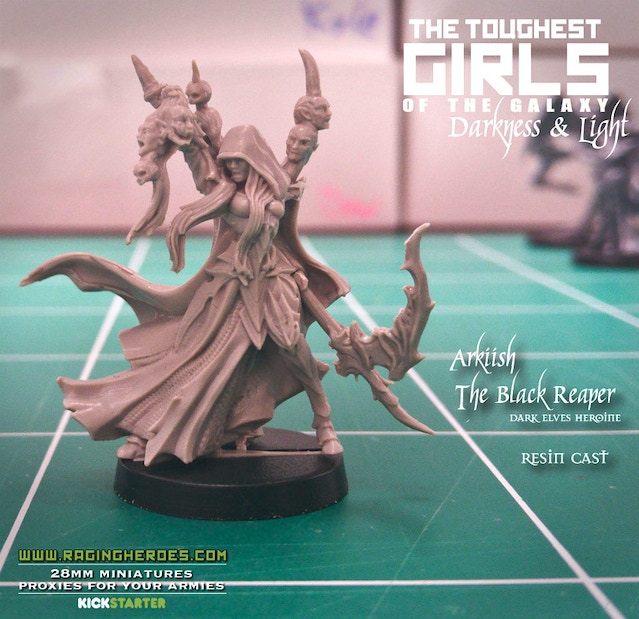 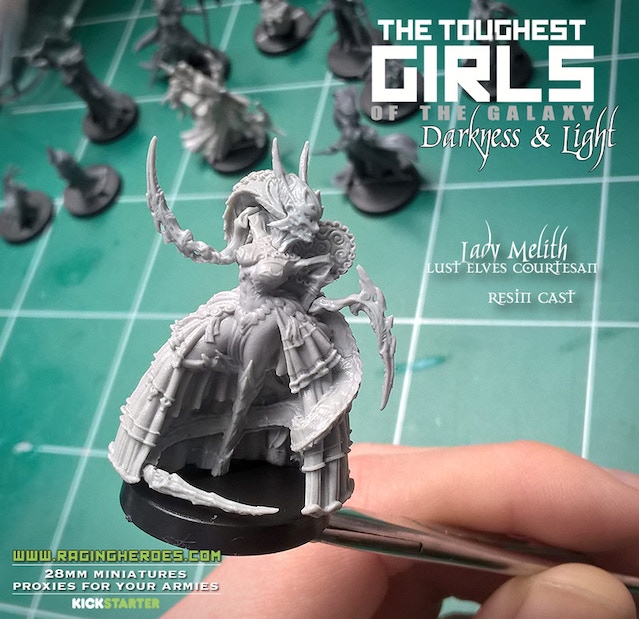 We're working hard to make the best minis of the galaxy, and perhaps there are those of you who would like to hear from us more often. And yet, preparing Updates is a much longer and challenging endeavour than anyone could imagine, so we can't always do them as often as we'd all like :(

Nevertheless, we've got your back and you're in good hands with this project. So whenever you have questions / concerns / comments / or even kudos about the TGG2 project, get in touch directly!

Just type into our Live Chat window at https://www.ragingheroes.com, or send us an email atRagingHeroesTeam@gmail.com ora message via Kickstarter. In virtually all cases, we respond in less than 24 hours during the working week. 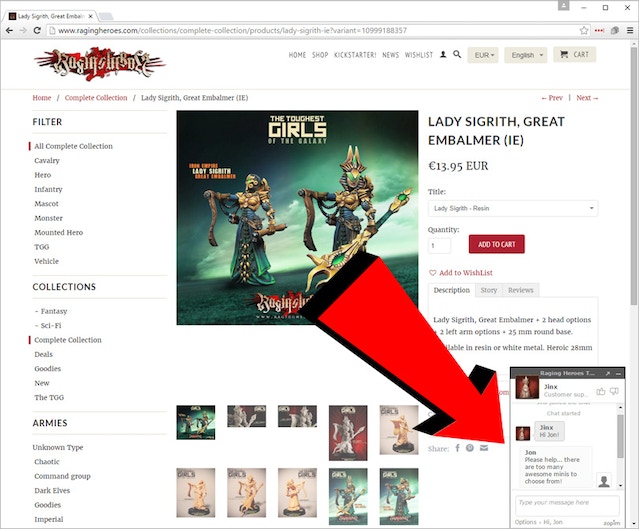 Tobias Is Out There…

----- Tobias has nuclear potential as a weapon of war. Look at what rabbits did to US (dust bowl / great depression) and what rabbits have done and are doing to Australia. Rabbits breed quickly. Millions of them can wipe out a nation’s food supply. Winged rabbits are much more difficult to contain and can attack on different fronts. Tobias is by far the most deadly bioweapon every produced -----
... message ends with the sound of glass smashing, followed by a high pitched squealing, the patter of small furry feet and then… silence ----- 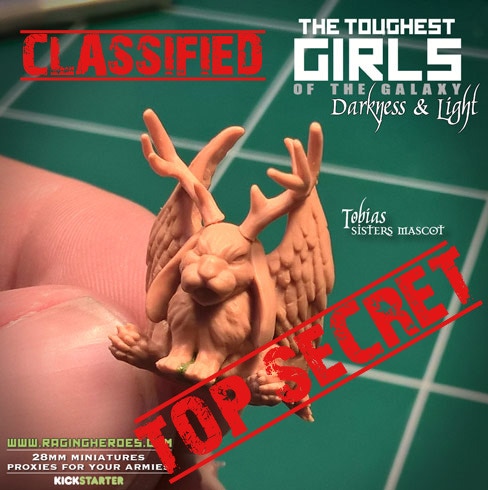 This was a recording we were asked to collect at midnight from a nearby phone box. It is from a mysterious stranger, referred to only as Bill (and which was later re-copied on the TGG2 message thread by said Bill).

We thought it might be important to share this with you and if you unleash Tobias on your collection, we can’t be held responsible for the consequences...

And a Special Deal Just for You…

Like all the best acts… we like to end with an encore, so how about a backer-only discount code as a small token of our appreciation to you, our backers!

This code gives you 10% off across our entire store, including on our latest releases, such as the uber-popular Nepharya! 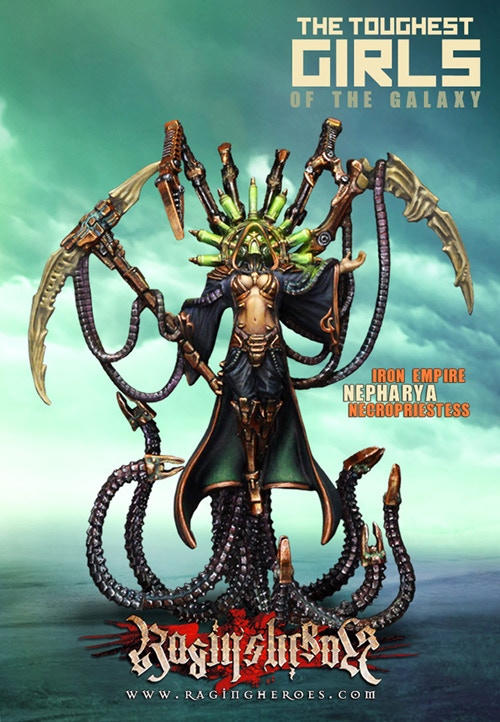 To use it, simply visit our webshop as normal and enter the code in the Discount box during checkout.

That’s all for now, thanks for reading and brace yourself for the next update; it will be another render-heavy one!