Here we are at Day 6. The campaign is going very well, and we are very excited about your awesome support!

However, together, we can do even more. Tomorrow, we'll spend the full day answering interviews and setting up new communications channels. But we also need YOUR HELP!

Please continue to spread the word, share images on your Facebook page, and talk about this campaign at your gaming club, on your regular forums and blogs, and to everyone you know!

The more new backers we get, the higher will the campaign go, and the more stuff we can UNLOCK!

You are already part of something big... Let's all make it even BIGGER!!! 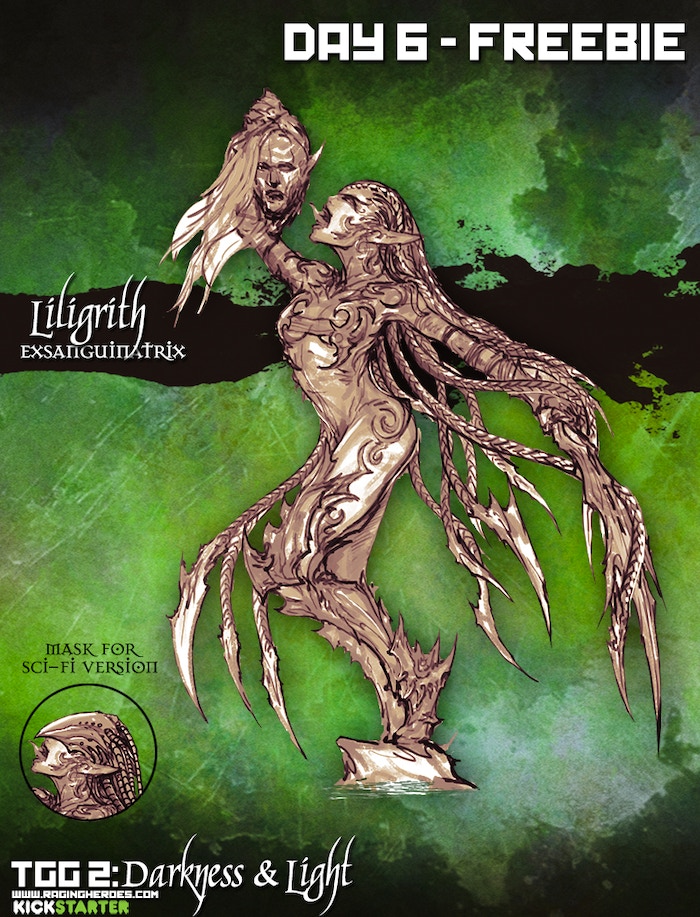 Due to their physical “deformities”, it is pretty hard for the Lust Elves to pass undetected in an civilian environment. That's were the Exsanguinatrixes come. These Lust Elves have a much less demonic appearance and they don't carry weapons except for the blades attached to their hair. They don't hesitate to disguise themselves as “normal” people to move undetected in a crowd. They can move extremely swiftly. But when they let down their hair...

At last! Here they are! The Free Upgrades! They are available to everyone. And some are already unlocked!

Going forward, they are going to be slotted between our regular stretch goals, until they're all released.

We've noticed a heated fashion debate right now: are big heavy boots the craze of the season or the silly whim of an over-hyped armour designer? With their thin frames and light garments, it looks like the Davidians have chosen their side. But we thought we'd jump in and share some info on this topic. 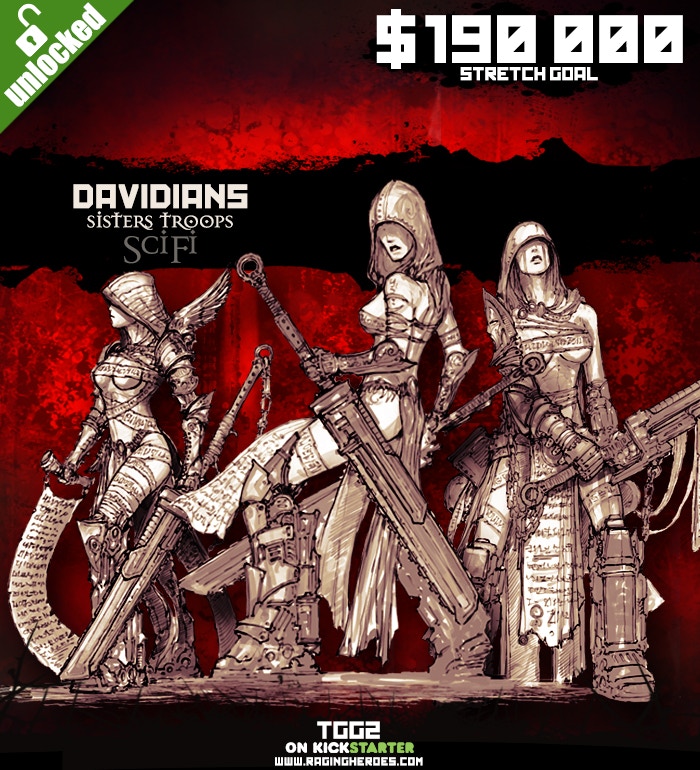 The Davidians are a very special unit named after the legendary Saint Davidia. The stories say that to protect a desperate civilian population, Davidia stood naked before the gigantic creature Goliathus and single-handedly defeated him.

The Davidians embody the fight of the weak and small against the powerful ones. They carry a very special weapon, the shocksword, a cyber blade designed to generate a shock wave which resonates with the molecular structure of heavy armouring. The heavier an opponent is armoured, the stronger the shockwave.

To be protected from the impact of their own weapon, the Davidians must be nearly naked, to the exception of their heavy cyber boots which are designed to absorb the formidable recoil impact created by their weapons.

So it is not rare to see the fragile Davidians charging monstrous metal-clad opponents on the battlefield and reduce them to a pulp. 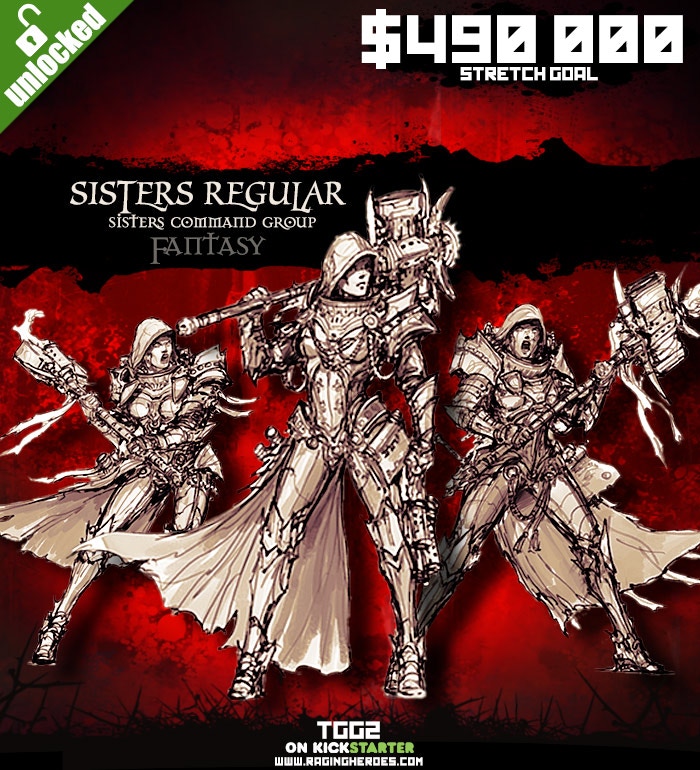 As you will have noticed on our TGG2 Kickstarter Story page, many of our troops are equipped with a spherical ball-joint system. Thanks to this, most of our miniatures have parts that are interchangeable and that can be combined in infinite ways.

So can you easily customise the figurines belonging to the same unit. Furthermore, in many cases, you can also use parts from another unit to create new compositions. For example, you could take Fantasy Davidians and mix them up with Sci-Fi Davidians. You could even go all the way and combine dark elf and Sister of Eternal Mercy elements. The ball joint system is the method we found to allow you to get as many pose variations as possible.

Also, as all our troops are in resin, they are very easy to cut and modify to create even more complex customisations. In short, there should be enough to keep you busy for hours, if you're so inclined...

By creating The Toughest Girls of the Galaxy, it seems that we have answered a big demand in the market. It is clear that men have always loved beautiful female figurines. But the female gamers were also very much looking for female minis and, to our delight, many have become TGG1 and now TGG2 backers.

With the TGG, we wanted to create a wide variety of female characters. Some are heavy armoured warriors, others are more delicate or sexy. Some are young women, others are venerable matriarchs. We try to cover a wide spectrum of characters and go beyond the fantasy and sci-fi classics. We are very proud of our little characters like the Lulus, the oldBaba Yaga or the strange Nertha from TGG 1, the Orphanage Sisters and the eerily disturbing Death Dancers from TGG2. 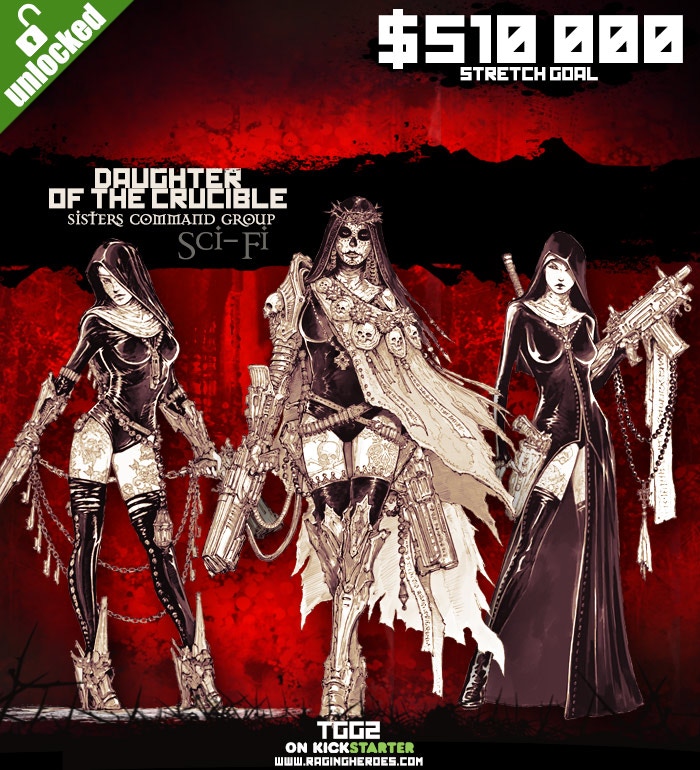 And guess what? In the same manner, many of our backers are also truly diverse as well as quite amazing characters. In fact, when we started interacting with them, we couldn't help notice that that their profiles were broader than the standard geek stereotypes (as it is sometimes portrayed by the general public), a mix that includes ranking officers, scientists, mothers, bikers, and more...

So, we thought this could be the opportunity to begin compiling backer portraits and share with you all the wide variety of our TGG backers...

So, come forward! Complete this survey and tell us a bit about who you are! We particularly want to hear about unusual experiences, or career choices, or life events. We're curious to learn more about you, and we'll share that through future blog posts and articles. 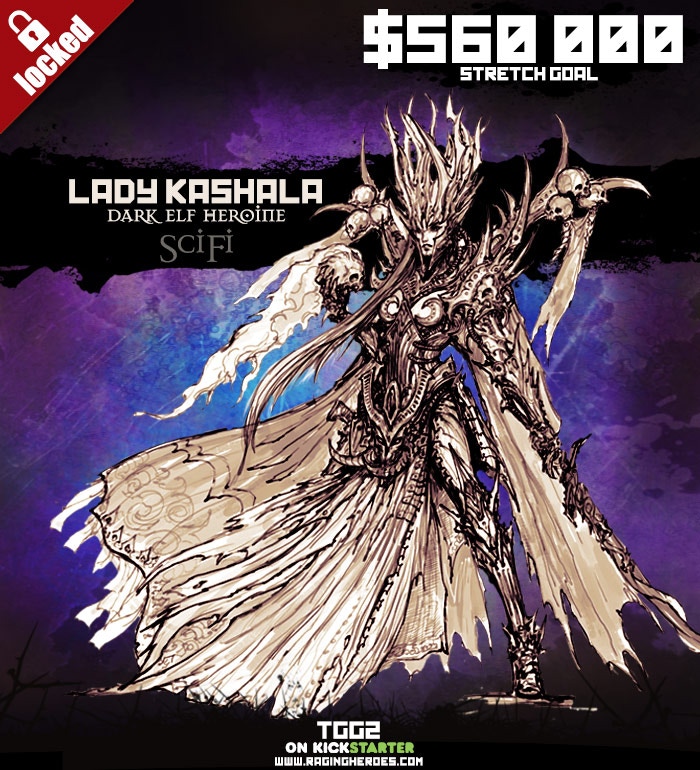 If you're a bit lost with this Kickstarter...

It looks like a few backers who may be new to Kickstarter are a bit unsure about out Stretch Goals, Freebies, Add-ons, increasing their pledges, etc. It is true that we do take all this for granted, but being confronted to a Kickstarter for the first few times can be confusing. So here are a few pointers below.

By pledging at Lieutenant Box and above, you are automatically getting Freebies worth over $200. We are unveiling a new one every day, you can see them in all their glory in each of theTGG2 Updates.

Every time the TGG2 KS campaign passes a new level of funding, we unlock a new item. For example, when we reached the $500,000, we unlocked the Altar of the Succubi, which means that you will be able to select this as one of your Rewards. So, the more stretch goals are unlocked, the more different models you can choose from once the campaign is over.

Once you've already pledged once to the TGG2 Kickstarter, there is a green button on the right of the TGG2 Kickstarter project that says “You're a backer", and just below it, a blue button that says "Manage your pledge”. When you click on it, you can add more funds. If you really want to increase the value of your Pledge, you can go to a higher Pledge Levels. The higher the Pledge Level, the better the deal.

After the end of the campaign, we will give you access to the Pledge Manager. It is a web-based tool that will allow you to select precisely which miniatures you want.

Add-ons are special items that you can also add to your Pledge count. They are not necessarily unlocked as Stretch Goals. For example, the Freebies will also be available as add-ons, for those who pledge at lower than Lieutenant Level, or those who want to select extra Freebies. We will add an image featuring the Add-ons with pricing to the TGG2 KS front page later in the campaign. 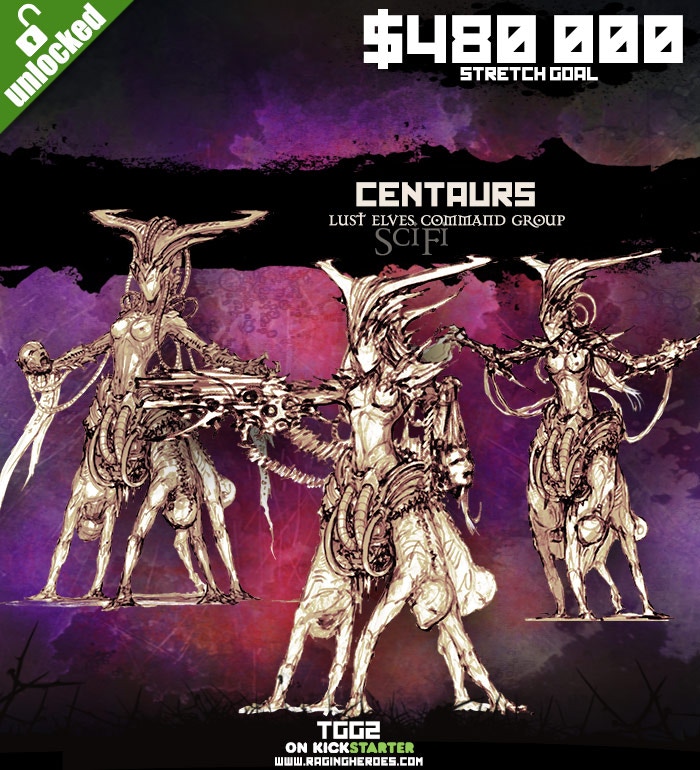