Dear TGG backer, with this 109th Update, the shore is in sight and we are nearing the conclusion of this first adventure together... Next month's Update should bring you the news that the last few remaining minis have been manufactured and shipped, but with this Update, already, the bulk of Rewards Selection have been shipped out to backers.

If you got everything but are still waiting for the Digital Artbook, please scroll down below to the Artbook section.

Don't forget that you can always keep an eye on the status of the production on this page. We update it whenever we get new stuff in, and note the date it was last modified as well. Scroll down to Wave 3: everything that's in green is in stock and shipping.

Here are the models that became available this month and are currently being shipped.

You will see that the Bikes, the Trikes and the Mechas are quite massive miniatures.

Regarding the Mechas, we strongly suggest that you really take your time and plan their assembly. The great thing about the joint system we created for the Mechas is that it gives you a lot of latitude for posing. But the downside is that, with so many parts, you won't be able to assemble everything to preview the pose without some elements together first... So make sure you work carefully and patiently, and possibly enlist a second pair of hands before getting out the glue... 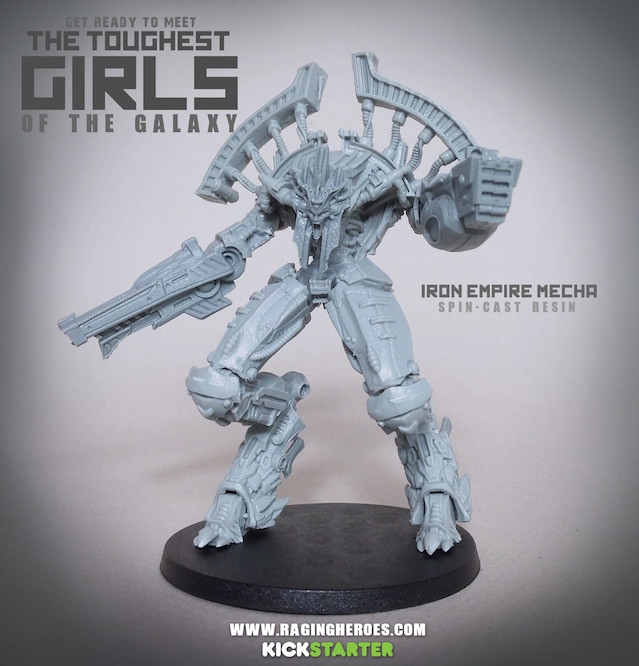 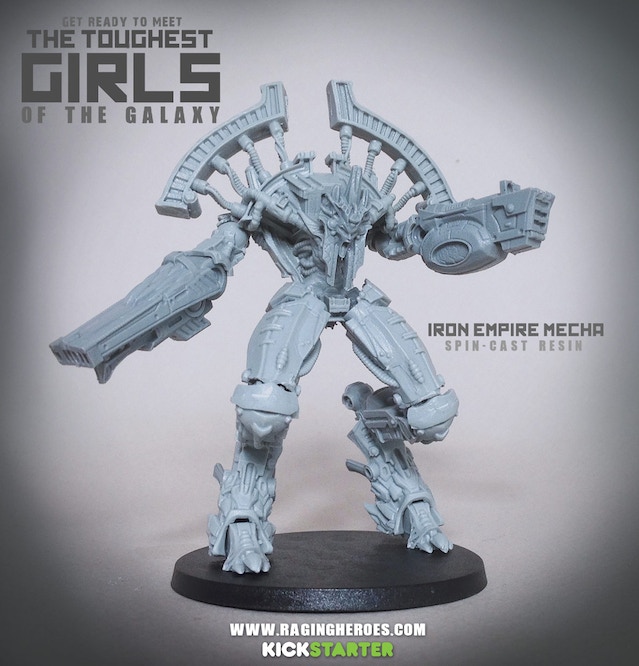 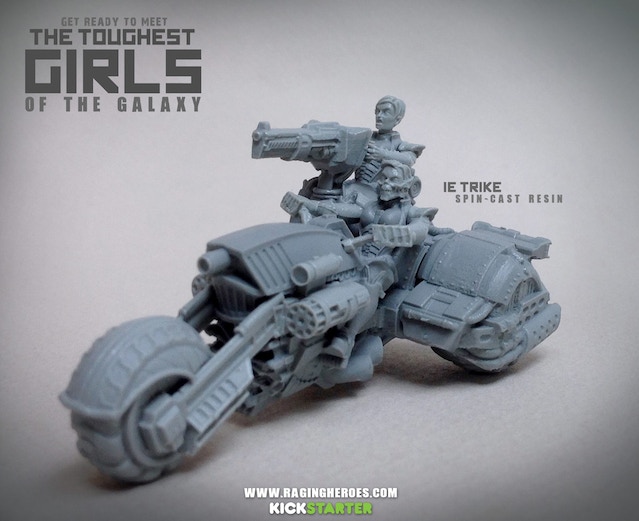 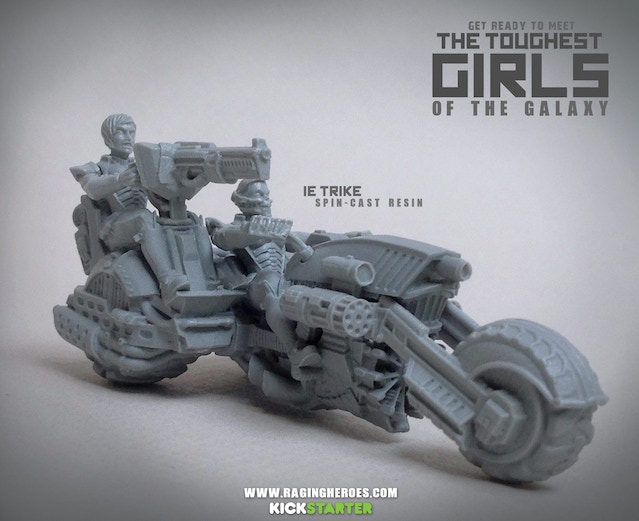 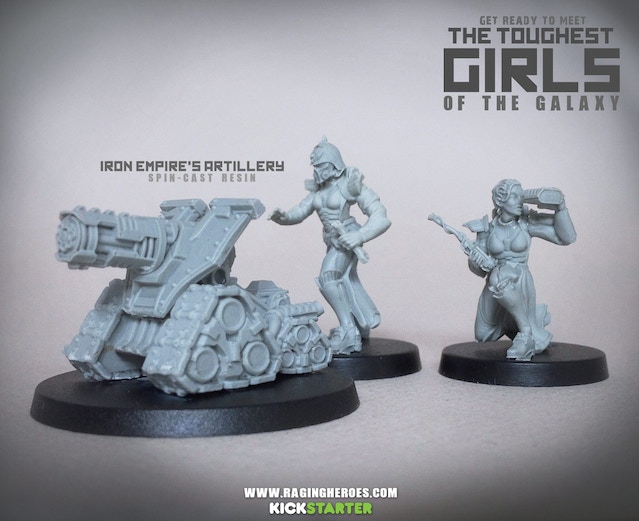 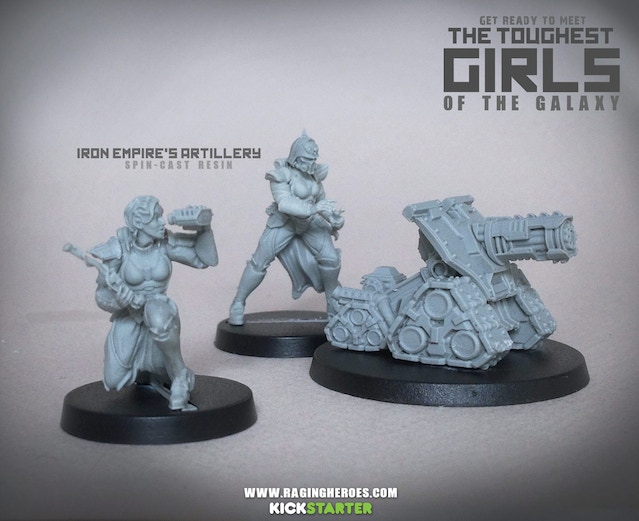 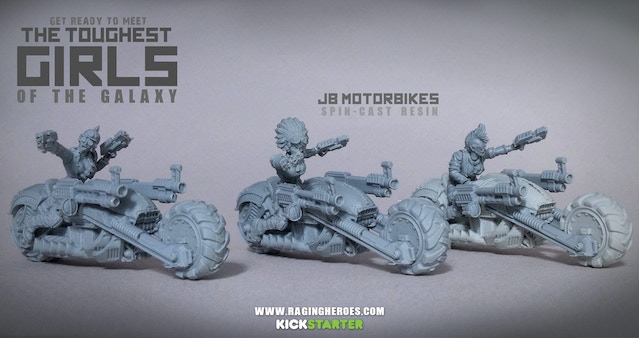 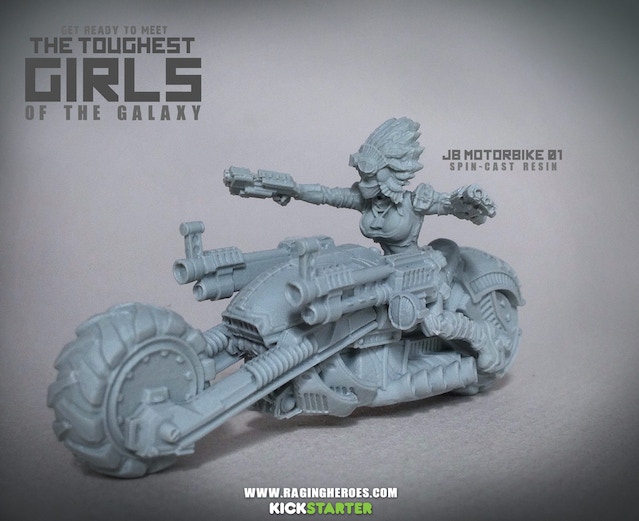 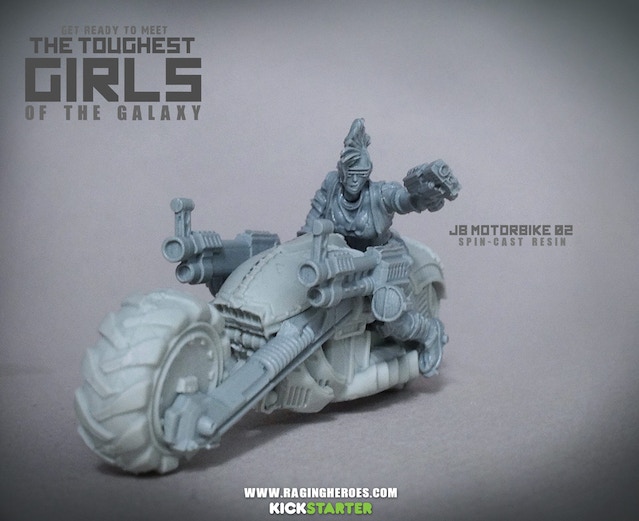 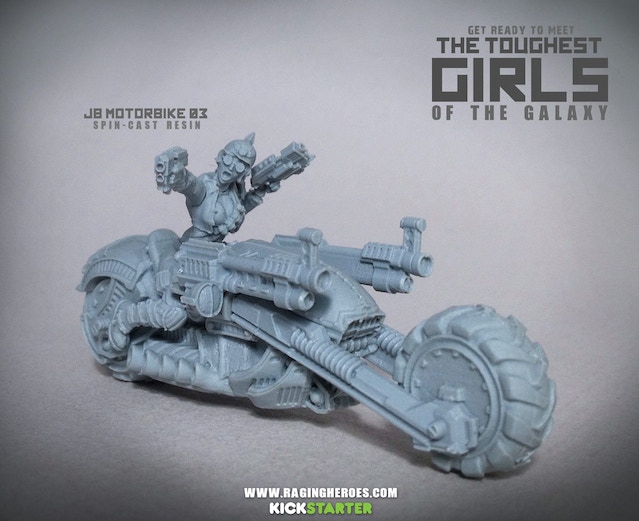 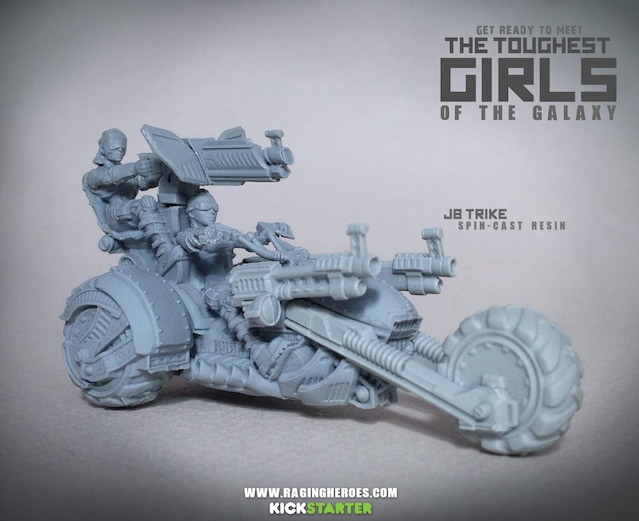 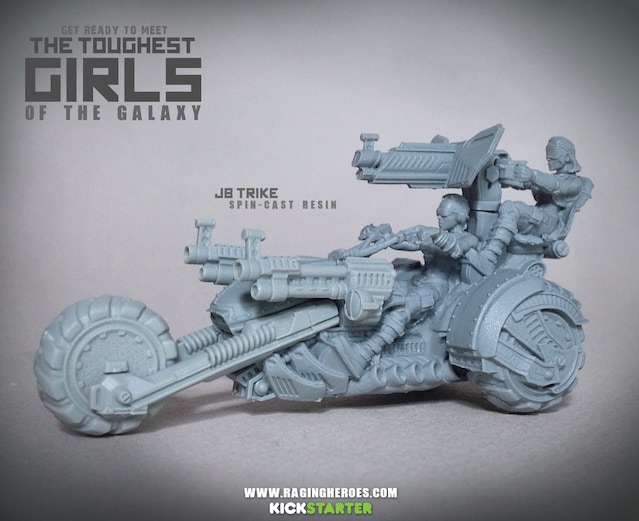 And look for photos of the KST Bikes and IE Bikes in our next Update!

We are very excited to have the WereSheWolves at the casting stage. If you recall, they were released in the campaign as Uber-Stretch Goals, so they were not really planned to be included in the campaign at first, and even if we had had the idea for these characters way back, the concepts were actually created in the heat of the last few days of the campaign, with Alex the concept artist and Benoit the art director going back and forth like mad to finally nail down the look they were after.

We should have received their cast several weeks ago, but they proved much harder to cast than expected. So we ended up having to go back to the 3D models, split them in a new way, and send them out to the 3D printer a second time before sending them back again to the foundry for casting!

But things are not proceeding smoothly and we should be receiving the WereSheWolves casts within the next 7-10 days.

The following models are being prototyped right now, and should be ready for approval this and next week. As soon as they are approved, they will be cast.

In fact, all accessories and separate elements are already cast for all 6 models! Only the bodies remain to be approved and cast, which should be done within the next 10-14 days, so we should have them in stock and shippable a few days later in August.

When we received the 3D prints of the 54mm versions of the 3 Freedom Fighters and of Nepharya, we realised that, for some obscure reason, they had come out a bit larger than what we had originally measured. They were closer to the 64mm mark than the 54mm mark...

So we had a quick debate on whether to reprint them smaller, but we could not bring ourselves to do that. They looked way too cool at this larger size and, truth be said, we would probably have enjoyed having them even bigger. So we kept them as is. They are definitely EPIC! 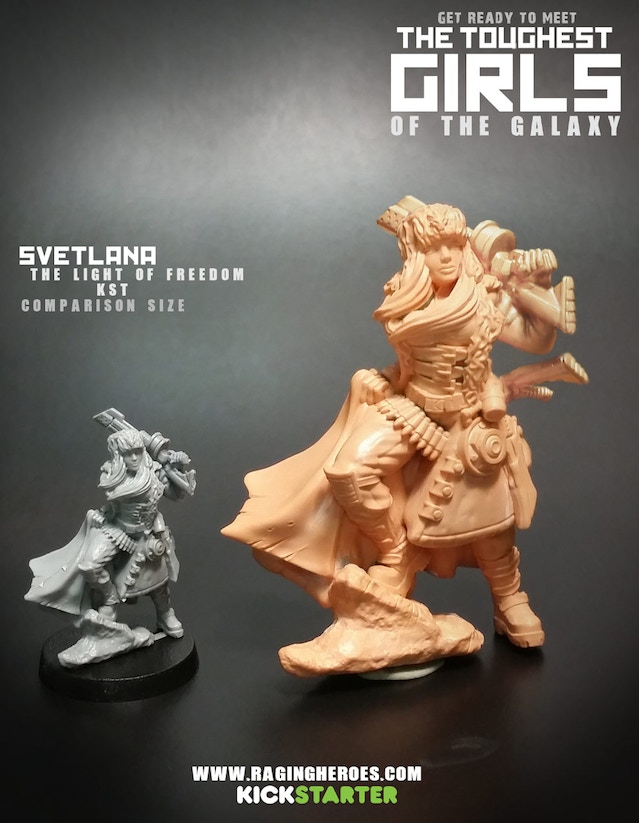 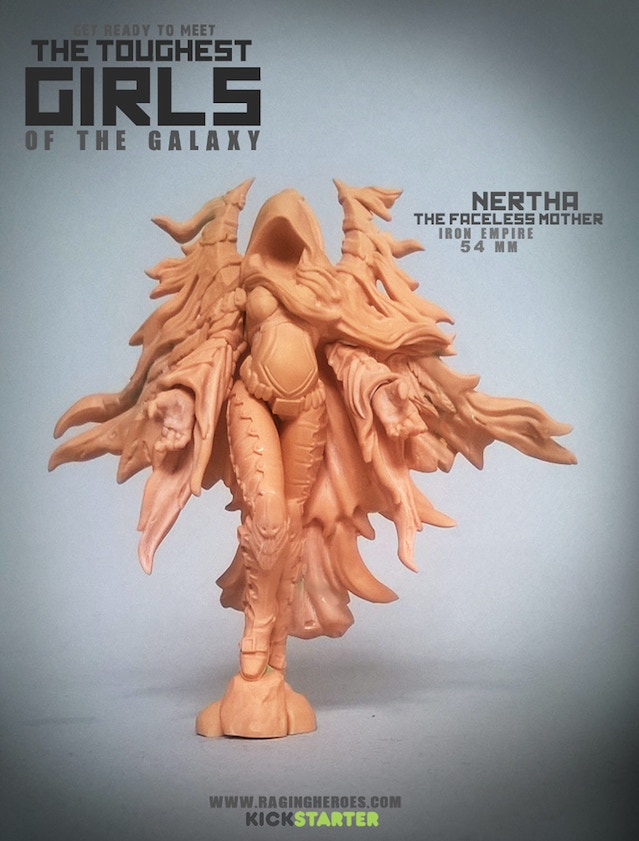 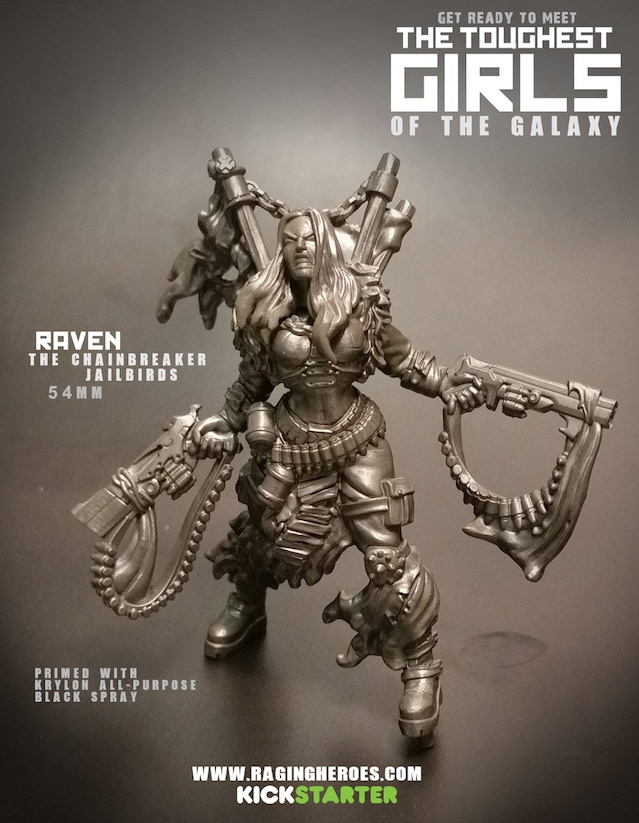 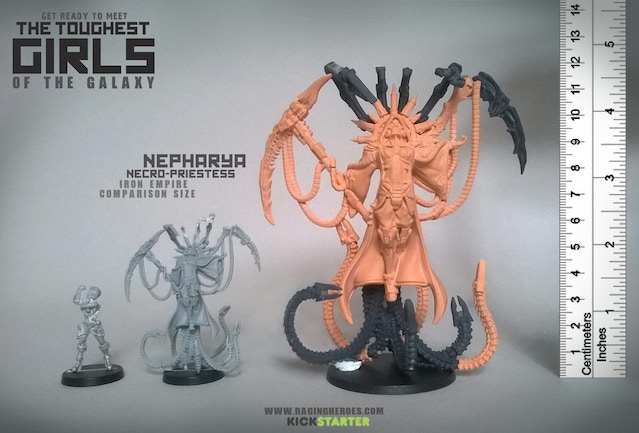 The hand-poured resin 54mm Nepharya with a numbered certificate of authenticity is reserved for the Connoisseur Box pledge/add-on.

We received an email message last week on how to assemble Nepharya 28mm, and we thought many of you might also find some use for this, so here goes:

You can save the image above, or grab this pdf (1Mb) (http://bit.ly/nepharya) for a handy reference.

We are currently hard at work on the Artbook. It will be quite a unique book as it will be composed mainly of colour double-spreads. It will provide a unique way not only to see the TGG in full fighting action, but also to get a peak into a more intimate side of their lives and culture.

Nearly every time we work on a double spread, we say to ourselves that it would make a cool T-shirt or a cool poster, so we'll be waiting for you to tell us if it is something we should do. We'll get back to this conversation as soon as we have more to show you.

Meanwhile, here's a sample of what we're currently working on. 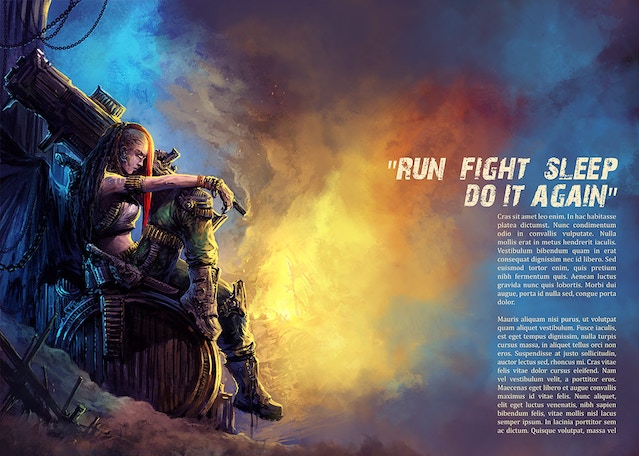 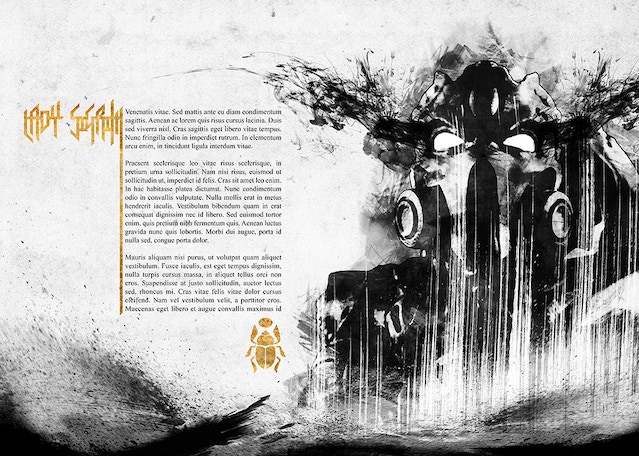 Here is the latest set of minis to come out of the nimble brushes of our painters. As you can see, there are fewer new models than in previous updates, as part of the painting team is currently on summer holidays. 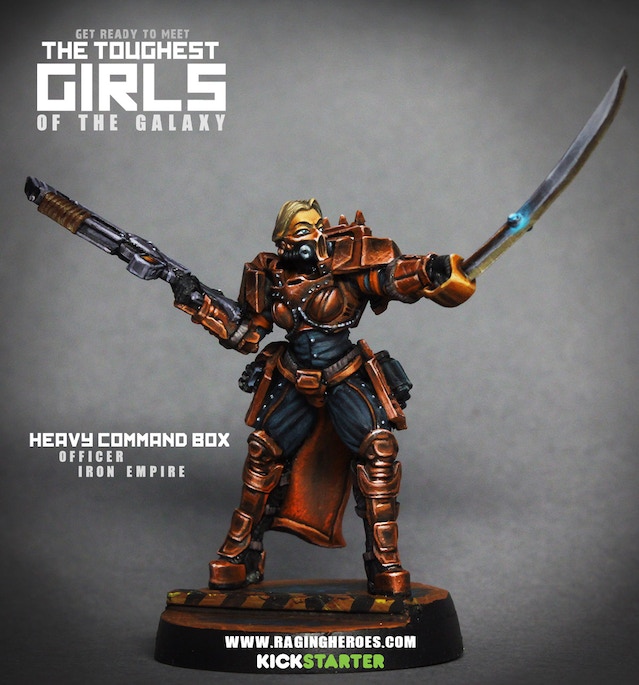 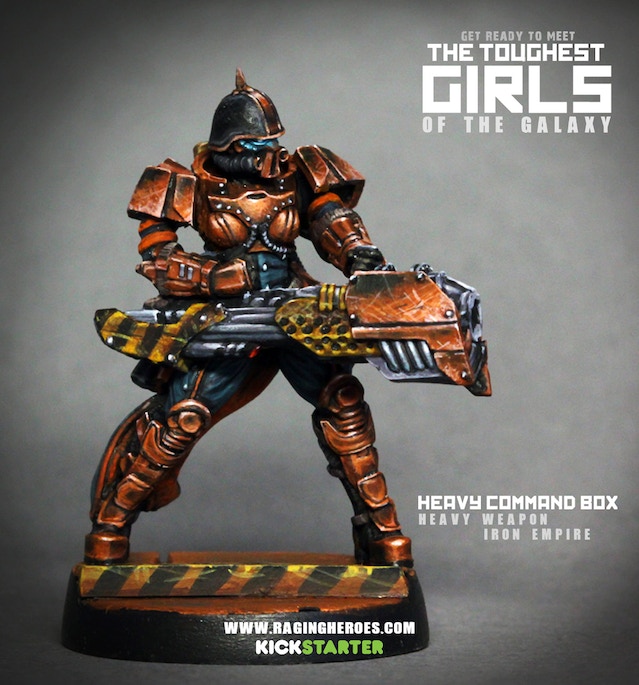 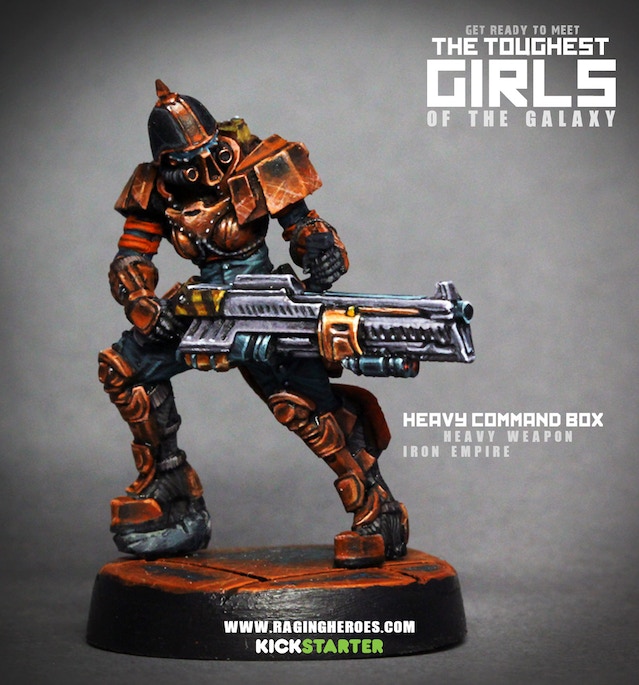 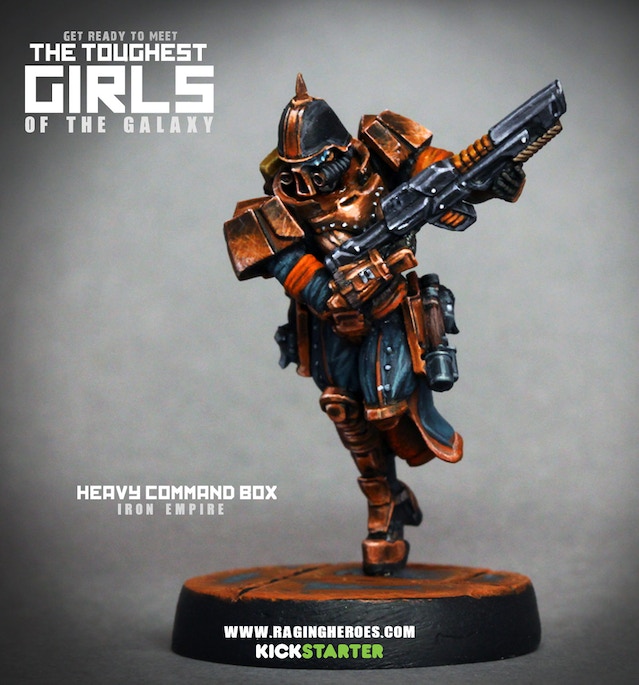 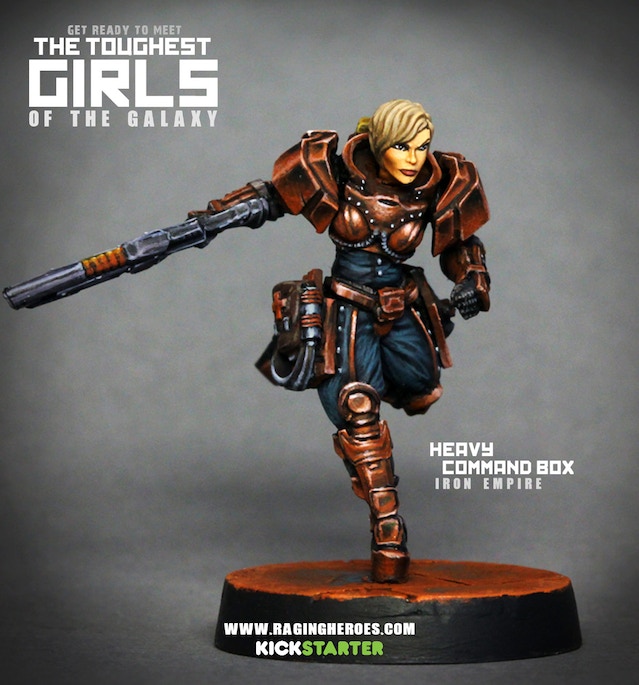 If you are interested to know how we paint the TGG minis, the colours we use, etc., you'll be happy to know that we are currently working on this. We will provide you with all this information soon, so that you can replicate the looks we've created for the TGG, if you so do wish.

Here are some of the questions we are frequently asked via email:

What is the size of the bases?

Most TGG minis come in with 25mm bases. The details for the base are noted on on the Pledge Manager. Please note that Aleksandr Kurganov got moved up to a 40mm base instead of 25.

Are there bases with bikes, trikes and mechas?

No :( As clearly noted in the Pledge Manager, there are no bases included with those models. One of the reasons for that is that since we don't have our own game yet, and since you'll likely use these minis in various game settings, the bases we might have provided would not have done the job on many occasions.

I don't remember what's in my Rewards Selection...

No problem. Simply go to the Pledge Manager and log in. If you forgot your password, no worries, you can create another one. Then, simply go to My account>View Order Status>View Order Details.

I moved and made the address change in the Pledge Manager...

NOOOOOO!!!! WRONG MOVE!!!! As mentioned in previous Updates, you MUST contact us directly with your address change, either via Kickstarter or via email at RagingHeroesTeam@gmail.com. The changes made in the Pledge Manager are NOT automatically pushed out to the shipping department, so it is imperative that we change your address directly in our shipping software...

I'm in the Drop Ship Programme, when do I get my stuff?

However, some of you will be happy to know that we have dispatched earlier today the Rewards Selection for the following Drop Ship locations:

I have another question!

If you have any questions or concerns, the most efficient way to get them addressed is to contact us directly, either via Kickstarter or by email at RagingHeroesTeam@gmail.com. We usually respond within a day or two, except on week-ends.

Please share your thoughts on the future of your TGG

So, with the TGG campaign coming very close to the end, we want to once again thank you for your amazing support and the great feedback that continues to fill our mailbox.

We also want to start looking at the future with you. Of course, there is the TGG2 campaign, which has benefitted from all we learned in this first TGG campaign, and for which sculpting is moving along at a brisk pace. But we also want to ask you about what you want next:

How do you want to see your most favourite characters evolve? What types of new troops would you like to see come to life? Would you like us to make bigger vehicles, or do you already find what you want elsewhere?

We know that many of you want to see a TGG wargame, and we are working on one. But would you be interested in a role playing game? Or would you like a board game? (We actually already have several ideas for that, but we'd love to hear your wishes).

We look forward to your feedback!